Generic USB cables can have a negative impact on your enjoyment of music. 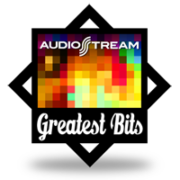 Not all cables are created equal

Looking for a cable with maximum signal transfer and incredibly wide bandwidth? Then the iFi Mercury3.0 is the cable you need.

Standard mass-produced cables normally have the signal and power cables compacted closely together. This hinders conductivity and often results in poor signal transfer.

Not so with our snazzy, new-look Mercury3.0 cable. 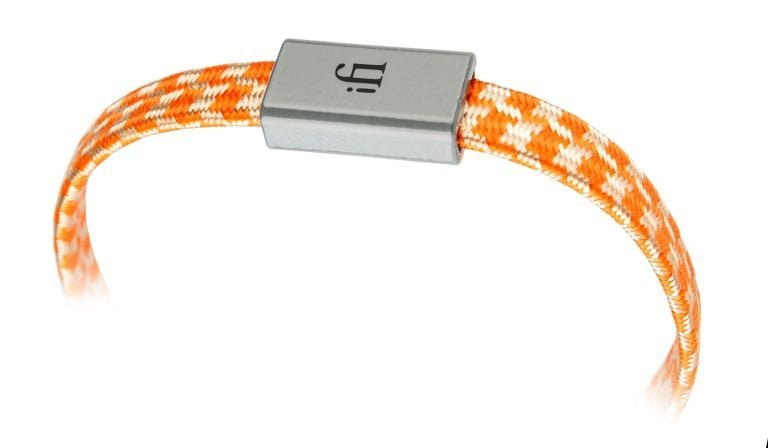 The Mercury3.0 cable separates the audio signal from the power with quadruple shielding to eliminate interference and jitter. It employs heavy OFHC continuous copper silver matrix conductors for the best possible signal transfer.

The Mercury3.0 wears its ‘3.0’ with pride. USB3.0’s ultra-speed offers an incredibly wide bandwidth to allow for the speedier transmission of data. Efficiency at its best. 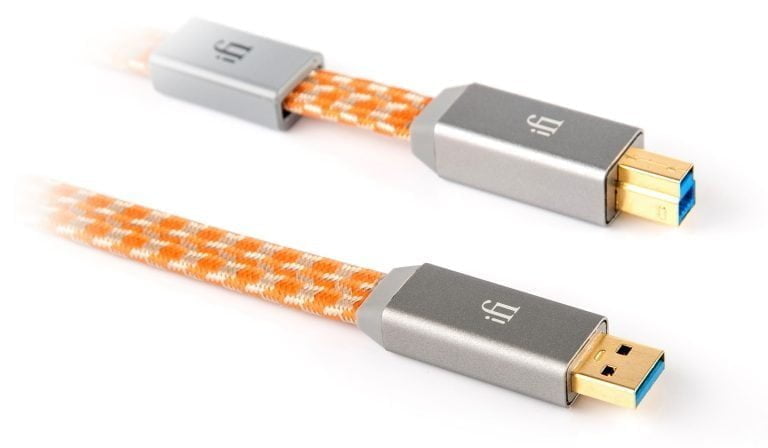 Each iFi cable follows closely the tech specs of usb.org.

The Mercury3.0 custom minimum inductance parallel type with quadruple-shielding. This offers even more protection from RFI and EMI noise than the original. Sound quality is not compromised as with many ‘off the shelf’ versions where inadequate shielding is commonplace. Critically, the whole design hardly has a 5% tolerance to the 90ohm impedance rule.

The signal runs through the cable and the final connector. This connector must also be exceptional.

Most USB cables use moulded plastic covered connections that do not shield the high frequencies present in the USB data link and noise radiates out. Very few manufacturers make their own connectors and rely mass-produced connectors which means durability is compromised.

The USB protocol is outlined in a technical paper onthe usb.org website.

We have pored over this paper to ensure that we have closely followed the tight tolerances/specifications. For example, a major specification is adhering to 90ohms impedance.

All iFi cables have been designed with this in mind.

Radio-frequency interference (RFI) is very similar to electromagnetic interference (EMI) but is found in the radio frequency spectrum. It is another source of irritating, unwanted noise often talked about as an ‘audio gremlin’.

EMI is a type of interference caused by errant and unwanted electromagnetic waves that are received and amplified by an audio system. They cause some of the annoying ‘audio gremlins’ we often talk about.

Most USB cables use moulded plastic covered connections that do not shield the high frequencies present in the USB data link. Noise leaks out and durability is compromised. 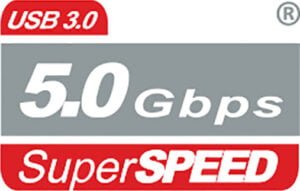 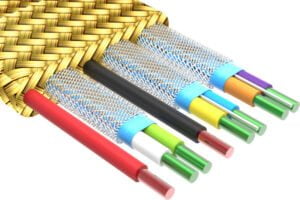 With generic mass-produced USB cables, the data and power cables are normally packed together. This means that they do not conduct as well as they should and they are not sufficiently shielded from each other. This has a negative impact on USB signal integrity and degrades sound quality.

Our quadruple shielding fully separates and protects the delicate USB data signal from the power. This protects the cable from RFI and EMI noise to provide the cleanest transfer medium possible.

Most standard USB cables do not address RF issues and are fitted with filters that work over too narrow a range and are only fitted at the ends of the cables, leaving the length of the cable to act as an antennae.

iFi’s three custom-made metal oxide ceramic filters have a different effective range to broaden the range over which RF noise is silenced. The middle silencer is adjustable and can be moved along the whole length of the cable. This then “detunes” the antennae formed by the cable. The other two silencers should be kept as close to each respective end as possible. 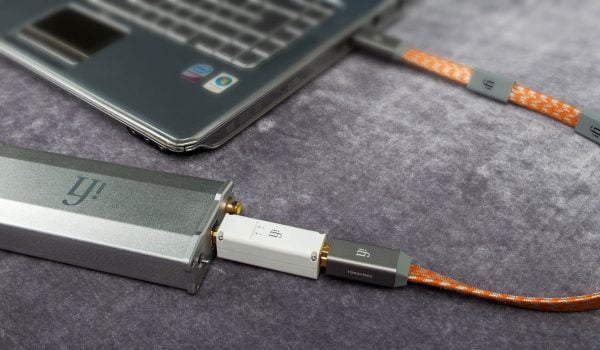 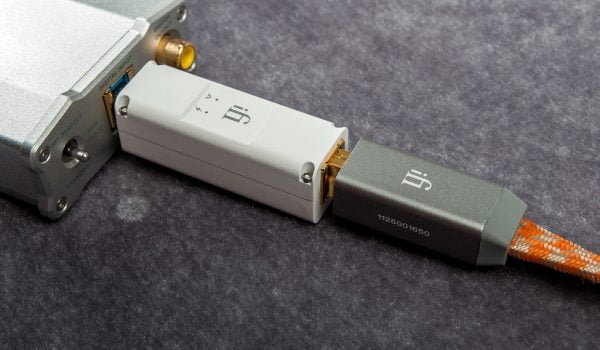 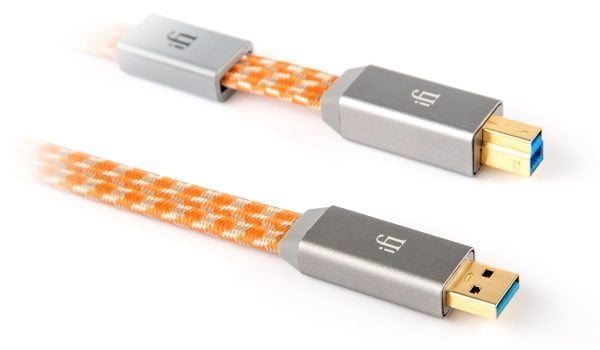 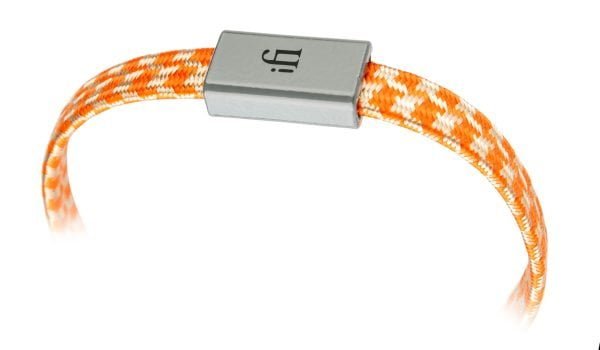 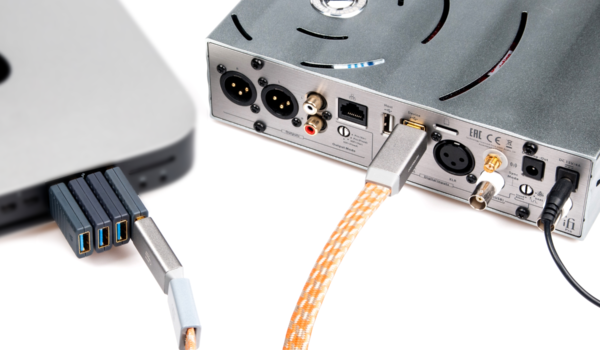 Mercury3.0 by Srajan Ebaen of 6moon

Thanks to Srajan of 6moons.com for his interesting insight into how the Mercury3.0 can improve your desktop system.
“Fine detail otherwise lost in the mists of distance or time confusion restored like prescription glasses do to aging eyes!”
“If the audibility, recognition and mapping of space was the first beneficiary, the overtone spectrum of rich timbres was next.”
“At under £250 delivered and for how audible its contributions are, I’ll have to call it an excellent value.”

I recently got the new iFi Diablo which comes with their iPurifier3.0 in the box. When used with a standard USB cord the results were a bit lacking. I took the plunge and got the Mercury and boy oh boy this made a night and day difference.
The Diablo now delivers natural, realistic, punchy detailed and emotional sound versus veiled and meh sound. Yeah £209 is a lot for a digital cable, but to defeat RFI and Jitter this made a huge difference to my £900 DAC/AMP! Money well spent if you really enjoy your music.

This is an amazing product. I thought that using it might result in a slight improvement in sound. However when I plugged the Mercury USB cable into my Denafrips Pontus DAC the results were instant and obvious. The music seemed as though it were playing much louder. In fact it was playing much “clearer”.

It was as thought a slight haze had been lifted. Vocals and instruments are now more focused and clear. Don’t get me wrong almost $300 is a lot to spend on a cable. However, if I had spend 3 times that on another piece of hIFi hardware, I would have been happy to pay it for results this dramatic. My only negative is that it is easy to order the wrong USB connection type.

Check what type of connection you DAC accepts before ordering. All and all product exceeded my expectations.

Believe it or not, I’ve never seriously tried different USB cables. It wasn’t a topic I was interested in. Sure, I saw and tried some of them, but I’ve never critically compared them. They were just random cables that I’ve come accross when I was trying out a friend’s audio rig.

When iFi Audio offered me their new USB cables, the Gemini & Mercury I was intrigued but I was also skeptical about the topic. I have many fellow audiophiles who claim that USB cables make a difference, yet some others claim it’s a placebo effect. I don’t think this argument will ever end, and I personally will stay away from it in terms of technical subjects. When I try and test any audiophile product, I trust my ears only, and I again did so for this article…

Such a great investment to my music

I must admit, I was sceptical at first as it feels on the expensive side, but with the excess noise coming from my laptop I was going crazy so I just gave in to temptation and bought this cable. What a difference this has made! My music is so much clearer and now no nasty noises to ruin my sound.

This has become one of the best investments I’ve made for a long time as I work from home so I’m able to listen to my music all the time and at whatever volume I want, but with the background noise I found myself turning down my music in hopes to stop this, but no joy, and since the Mercury cable, absolute joy! I have also bought iFi’s iPurifier3 type b to pair with this product and the difference is phenomenal! I definitely recommend for all those out there who love their music.

Overview of iFi Audio accessories and filters – does filtering matter?

This article was born in my head a long time ago, mainly due to repeated questions from time to time, whether I had contact with filtering devices like iSilencer, Jitterbug etc. But since I run my humble blog, I’ve probably got used to most people to a few maxims, which I am guided in total not only in the field of audio equipment, but generally in life…

SIMPLY THE BEST USB3.0 ON THE PLANET!

EQUIPMENT USED TO TEST:
As you can see from my photos I have the KEF LS50W speakers sitting on the new deluxe version ISO ACCOUSTIC 150 stands. I have both the iFi iGalvanic and iUSB3.0 sitting on iFi stand (using spikes without the couplers). I have 2 ifi Mercury USB3.0 cables, one between the PC and iGalvanic and 1 between iGalvanic and iUSB3.0. What more I calibrate the system flat using Dirac Live software utilizing Earthworks M30 Mic mounted on a Tri-Orbit heavy duty Mic stand. I connect the Mic to the RME Babyface Pro recorder using the best balanced special edition hand terminated Mogami Mic cable. The speakers were aligned using Bosch laser tools.

CALIBRATION FOR A TRUE TEST:
Many will disagree on what cable works in their system. Unfortunately, those that do not have a well calibrated system really do not know what a given cable does in regards to a flat response. Since the Calibration is the single biggest difference in sound quality and clarity most are hearing the distorted reflections of their speakers as much as the speakers themselves. Hence most speakers and reflections sound mid bass heavy and bloated as reflected sound creates many frequencies at different phase sort of like an unfocused camera Lens smears the picture. Once you calibrate you can actually hear the true effect of the cable.

COMPARISON IMPRESSIONS:
I have tried at least a dozen USB3.0 cables including Wireworld USB3.0 and all the way down to generic like Amazon Basics.
Believe it or not in USB3.0 the 3 foot Amazon basic outperformed other cables. It had the quietest background. The Wireworld is bright and has a lot of high frequency hash noise that may sound good in an uncalibrated bloated system. In a calibrated system for me it was really noisy.
When I first installed the new ifi Mercury USB3.0 cables I listened in awe as I never heard such dead silence removal of hash coming from the audio signal. Suddenly piano had body and texture. Everything came alive. Putting other cables back in its place took seconds before you ripped them out of the system. Every other cable sounded noisy compared to these new Mercury. I let a non-Audiophile friend listen and compare. He was amazed how the other cables sounded like they had “static” compared to the new Mercury cable. You could see that with the Mercury he listened patiently and could not have enough. With the others he lost interest and was ready to go home.

CONCLUSION:
There is no doubt that iFi have come up with a winner. This is certainly the best USB3.0 cable I have heard on the planet!!!!